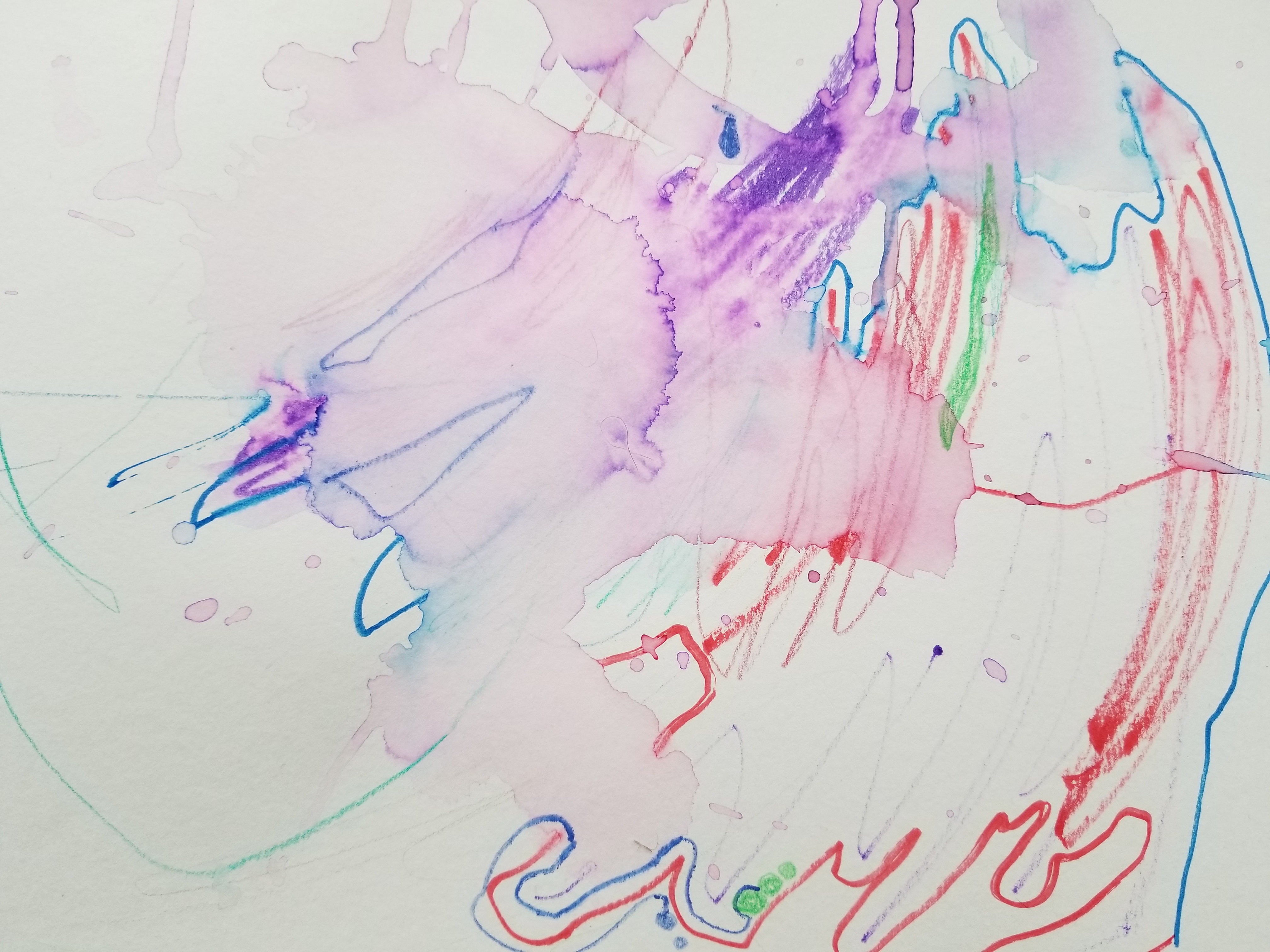 above: collaboration with Edith, age 22 m.

When I first learned I was pregnant, I was awash with gratitude. This had been a fervent desire for a long time, and it felt like the fulfillment of destiny. Motherhood, I felt sure, was something I was designed for.

I was 37 at the time. Until very recently, my adult life had been rich in learning lessons but thin in measurable success. Over the past couple years I’d finally wedged into a real job: livable salary, work I was proud to be doing; I was engaged: the first relationship I wasn’t about to flee. And now – pregnant. Finally it felt I was doing things right. I was very ready to surrender the well-worn chapter of my youth and relish matron-dom.

My fiancé and I attended ‘hypnosis for birth’ classes – enough to convince me that birth could be as smooth as pregnancy had been. My body had adjusted to its new job with ease; I never stopped African dance class, and proudly marched up mountains even in my eighth month. But we had a doctor who believed firmly in safe surgery over even remotely risky natural birth. “Your hips are too narrow,” he said calmly; it couldn’t possibly go well. The confidence I’d nurtured crumbled. If we were of a time or place not so thickly padded by modern medicine – would I have caused this baby’s mutilation, or our deaths? How selfish of me to push forward in this idea that I was ‘supposed’ to be a mother.

A C-section was scheduled. I never went into labor. The experience was a nightmare of needles and tubes and a desperate panic I’d never felt before. My fiancé was not shielded from view of the doctors’ work. Somehow still though, he held me in a steady gaze as I was sliced open.

My baby was delivered. I still have a hard time saying she was born. Edith Eva Terese emerged perfect, but the trauma of the delivery left me weepy. It was the stories of other women that pulled me back together. First the kindly nurses, and then friends, and even strangers – told me their own experiences of complications, unexpected difficulties, and fear. It changed everything to know I was not alone in having had an experience that shook me. And I realized that although the details of every story are unique, the emotional themes of motherhood are as common as the condition  itself.

This epiphany of connection with other women is, of course, one of the those common themes. My mother had my younger sister, Rebekah, in our home in Epulu, a small town in the Democratic Republic of Congo. It was early November and deep rainy season; there was no way to travel the 75km to the nearest missionary clinic. My mother went into labor in the care of Kavira, principle of the primary school and also midwife. Rebekah Sylvia – child of the forest – was born safe and healthy. And my mother wrote of the shift that happened between her and the women of the community. She had her baby as every other woman there would, and a certain knowing, acceptance, and connection opened, knitting her into the community of women in a way that transcended other boundaries.

Now, I am mother of an almost-two-year-old and the wonders and the mystery are new terrain. Her wilful independence, her uninhibited enthusiasms, her inventive navigation of this world. “Go up? Yeah!” she says, giving herself permission to climb the stairs. Now the stories I hunger for from other women have to do with having babies (because, truth is, we are brewing up a second; we expect Edith’s wee sibling in late fall) and still keeping one’s head above water financially, self-respect professionally, and a sense of self, creatively… My confession: my daughter eats long, leisurely meals while watching movies – two or more a day sometimes – so that in mornings, or on weekends, my mind can drift just a bit, and I can write. If screen time rots the brain, she’s a goner.

She is still my chubby baby with the sticky-outy belly and hair soft as milkweed floss – but her nails, which used to yield to my careful incisors like little flower petals, need real clippers now. And her breath is no longer so baby-sweet. Now I can almost picture her at age seven, 12 – even the glimmerings of 21. She will have her own version of our story then, and my performance as mother will be found lacking – or at least subject to analysis and response.

I know that at each of those times I will be wide-eyed with the wonder of her sometimes, and also, sometimes, lost in doubt and confusion. And I know that  billions of other women will have gone through the very same thing, in deeply familiar iterations. I hope, when those stages of motherhood come, I have other mothers around me and we buoy one another with our honest stories. What a force this connection is. Are we doing all that we possibly can with it?

2 thoughts on “Letter from the Editor: The Shared Story”