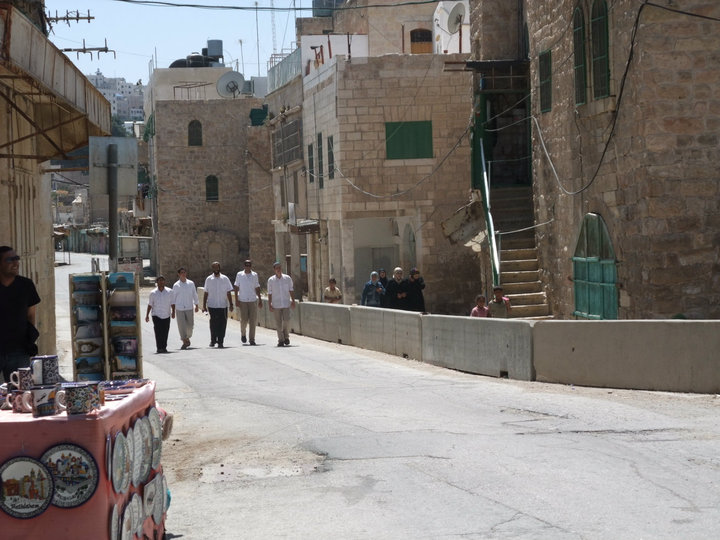 Above: Shuhada Street, the main industrial street in Hebron, is closed to Palestinians, effectively bisecting the city. To cross the street you must go miles to get around it. Palestinian women are walking on the other side of the barrier. Israeli settlers are walking down the middle of the street.

It is fitting and not entirely coincidental that I am writing a piece for a publication called the ‘elephant’. The ‘elephant’ is a metaphor used by Buddhists to represent the elements of our mind that are below our conscious awareness, but that nonetheless drive our behaviors. Neuroscience has adopted and adapted the metaphor recently to describe the same. The full metaphor is that the human brain is like a rider on an elephant: the rider represents the small portion of our brain’s processing that we are consciously aware of, while the elephant represents the vast majority of processing that is opaque to our introspection.

My research examines the processes in our minds that drive conflict and hostility between groups, and this analogy matters to me because it raises the possibility that we may not even be aware of many of the internal processes that are driving conflict. If we combine this reality with the fact that our brain is inherently biased in how it processes the scads of information coming in every moment, we have the biological basis of what many call ‘implicit bias’. To my mind, this is an evolutionary legacy that we have to confront if we are to truly reduce conflict.

Before I became a neuroscientist, I thought the brain’s job was to provide us with as high-fidelity and accurate a readout of the world as possible – that anything short of this was pathology. I now know this is precisely false. The brain cares not one whit about showing us how the world really is; it only cares about showing us what helps us survive. For example, all the optical illusions we are delighted to experience are not due to design flaws in the brain –  they are illustrating the biases that are there by evolutionary design. When you see a face in an object (like the front of a car), this is not a random misfiring – these capabilities of the brain allow us to more easily spot the lion hunched in the grass, and do this very quickly. This bias sometimes has us mistaking inanimate objects for threats, but better false-positives than false-negatives! In other words: Brains that have these biases are not eaten. Brains that don’t have this bias, or that process the information slowly and deliberately, are eaten. We are hypersensitive to specific sensory features because they kept our ancestors alive.

Just so for other brain systems. Most fundamentally, we have a tendency towards tribalism – to looking at the world not just in terms of ‘me’ and ‘you’, but in terms of ‘us’ and ‘them’. The tendency is so strong, that when scientists divide up children or adults by having half of them wear red shirts and the other half wear blue shirts, the people start favoring their own group members. Red shirters are more likely to trust and engage with and favor other red shirters, and blue shirters respond the same to other blue shirters.

And once tribalism is in place, a whole host of other cognitive biases come online. For example, we commit ‘attribution errors’. When we do something bad, we usually attribute it to circumstance (“I was speeding because I’m late for a meeting”), whereas when someone else does the same bad thing, we usually attribute it to their disposition (“They were speeding because they are a maniac”). This extends to groups, as well. When it was revealed that Hillary Clinton had some government emails on her private server, her supporters saw a clear situational explanation for this (“Honest mistake; others do it too”), whereas her detractors saw it as a clear indicator of who she was – it was a window into the soul of “Crooked Hillary.” On the other side, when the Access Hollywood tapes caught Trump glorifying sexually assaulting women, his supporters invoked a situational explanation (“It was just locker room talk”), whereas his detractors saw it as an indicator of “Lecherous Trump.”

A whole other set of biases also shift how we process information Confirmation Bias), how we think others portray our side (Hostile Media Bias), and what we remember about ‘them’ (Availability Heuristic).

As with the optical illusions, these social illusions occur in the ‘elephant’ – they are chugging away every moment of our lives without our endorsement, permission, or awareness.

And why? Why are we beset with these social illusions? Again, because these are adaptations that kept our ancestors alive. The human brain evolved in an astonishingly violent time. In Africa, our ancestors survived in small tribes, eking out an existence in fierce competition with other tribes of humans. The archaeological evidence suggests that 15 percent of every generation died from warfare. This was life for hundreds of thousands of years. By contrast, all of recorded human history – the Roman Empire, Ancient Egypt, the Mongolian Empire, The Crusades, the Emancipation Proclamation, the Geneva Accords – all of this was in the last ten thousand years. Certainly, the large, cooperative, diverse environments that we find ourselves in today are very different from the environments when evolution was so firmly shaping our brains. As a result, we are trying to solve 21st Century problems with stone age psychology.

But thankfully, an unconscious tendency towards tribalism is not our only evolutionary legacy. Our brains may be pre-wired with the strong tendency towards tribalism, but every one of the 100 trillion synapses in our brains that govern every thought, wish, desire, memory and dream you have ever had are designed with a fundamental organizing principal: the ability to change. In those synapses are little chemical messengers (neurotransmitters, which you have likely heard of, like dopamine and serotonin), and neurotransmitter receptors. But holding these in place are hundreds of different proteins, which allow the entire structure of the synapse to change completely in a moment.

We may come pre-wired, but nothing is hard-wired. We can change. And one way we can change is by re-wiring our social illusions.

For example, simple experiments have shown that simply instructing people to think in terms of individuals rather than groups, or to practice applying situational rather than dispositional explanations for behavior can change attitudes towards groups.

Even more encouraging, and potentially more lasting, we also have the ability to gain conscious control over our unconscious processes. The most dramatic examples of this is the yogis who gain the ability to consciously control their core body temperature. This is a fundamental bodily process that is normally regulated by the ‘elephant’ – by your unconscious brain regions. For many processes normally controlled by the unconscious, our conscious brain is at least able sometimes to take over (think of children short-circuiting anger by counting to 10, or us taking over conscious control of our breathing rate for a spell). But never do we even have an inkling in our lives that this would even be possible – so for this there isn’t even a toe hold. But with practice… Surely if conscious control of body temperature is possible, conscious control of ‘social illusions’ should be easy, by comparison.

We even have a framework, a pedagogy, to help us along the way. Buddhists – one of the oldest sects of applied neuroscientists – have a methodology that enables them to gain conscious control over emotional responses. Like all 12-step programs, it starts with acknowledging that unconscious forces (emotions) drive our behavior, and then involves techniques that slowly allow practitioners to gain control over these powerful processes. Why not apply this to our cognitive biases, as well?

In the words of the Buddha:

The thought becomes the word

The word becomes the deed

The deed becomes the habit

And habit hardens into character

Social biases may be automatic and unconscious, but it is certainly possible to make unwinding these biases just as reflexive – it just requires practice.

I see this as the best path out of the cycle of psychology that drives us over and over again down the same halls of misunderstanding and conflict. This, I believe, is the best way to put science to work for peace: use our minds to change our brains. Because the biggest impediment to peace lies between our ears, but so too does the source of our potential salvation.