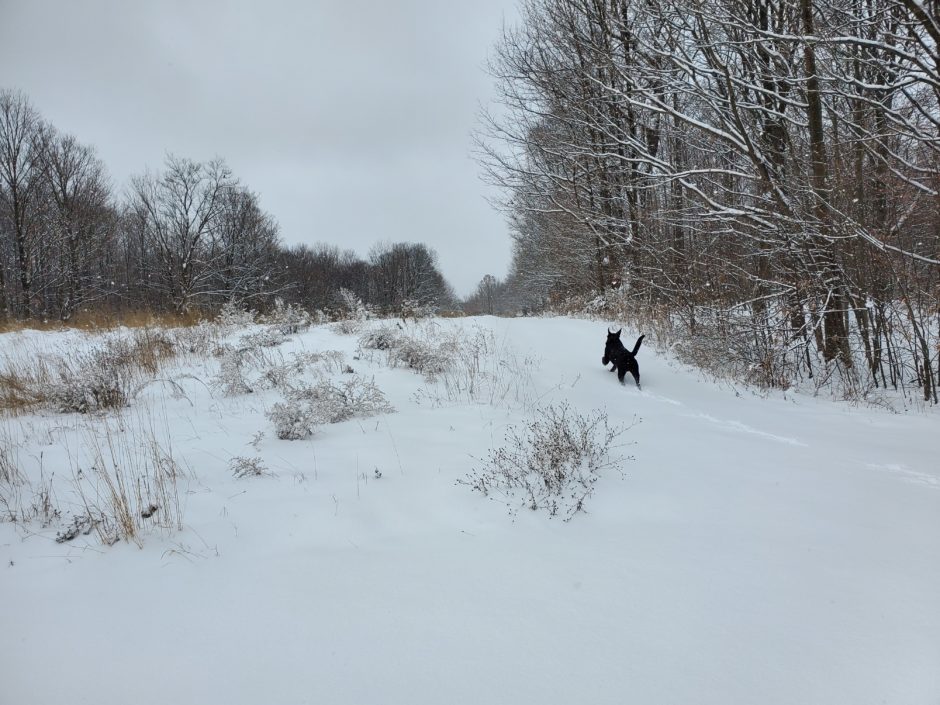 One year ago, in early 2019, we had a new baby, a new house, and I had a new job. Baby Florence V. Grace was healthy and calm, the house felt exactly right for us, and the job was one I felt sure I’d love. We had wished and worked for each of these for a long time—and all became reality within several weeks of one another.

By any measure we knew ourselves to be profoundly fortunate. And yet, 2019 had some very rough patches. The landscape of dreams fulfilled, which had appeared pearly smooth from a distance, proved at ground level to be treacherous. But as is so often the case, it was the hard times that led to the most valuable learning.

First, there was the issue of Otis. When Otis—one of our two very large dogs—joined us four years ago, we lived in the woods in the Adirondacks. He roamed freely, and also accompanied me almost daily on a hike up a mountain or around a lake. Even after we moved to Syracuse, Otis’s life was relatively unfettered. Our apartment was in an old farm house surrounded by fields and while my piecemeal employment was mostly a terrible strain, the bonus was that I was often home. Otis and I, with then-baby Edith in a carrier on my back, found many trails for long, leash-free walks. Abundant freedom and movement seemed as important to his well being as they were to mine.

Now, and all at once, we lived in a house flanked on all sides by other houses; both Chris and I had jobs that required our presence on-premise; and even when I could fit one in, our walks were slowed by the addition of a second child in tow. Otis was suddenly expected to stay indoors for long days and content himself with modest, leashed outings.

The adjustment did not go well. Almost immediately he learned to push open windows and the sliding glass door. We came home to broken blinds, scratched sills, and winter winds sweeping through our new house. When finally he’d slink home he endured, head hanging, our waves of anxiety and anger. Beyond the damage, and my dismay and guilt at not being able to provide what I felt sure he needed, it was the opprobrium of our neighbors that shook us.

Suburbia bristles with barriers, some visible and some not. Some of the rules were as difficult to explain to Edith as they were to impart on Otis: We can walk on this grass, but not that grass, right next to it. No, we cannot play on those swings—they are not ours. Otis, you can sniff this bush, because it’s next to the road, but not that one, because it is next to a house.

Meanwhile, at my new job, I was smashing into boundaries similarly invisible and no less consequential. The hierarchies of power and unspoken rules of engagement in the office were bewildering. Again and again I did the wrong thing: I spoke in meetings I was supposed to have been quiet in, I was emotional when others were even-keeled, I made choices when I should have deferred the judgement call.

At other times in my life,when I have faced either blunt disapproval or curbs on my autonomy, I have not been able to endure it. Being found wanting, or being asked to change, was always a blow to my self esteem and would send me in a spiral between self-castigation and outrage. Inevitably, I sought escape.

Now, too, the urge to flee rose up as powerfully as bile, but this time I truly did not want to go. I knew that to discard all we’d achieved would not bring relief, and would say as much about my own limitations as those of my surroundings. I wanted to stay in this difficult job as much as we wanted to stay in our new home.

At a crucial time, I attended a workshop run by the Reverend Brian Konkol, the gentle curator of spiritual life at Syracuse University. The workshop was about finding fulfillment. There were many valuable messages, but one that resonated with me in particular was his explanation that fulfillment comes from putting one’s values into practice, and the opposite—all those feelings on the spectrum of discontent—come from acting out of fear. Fulfillment, then, was determined not so much by one’s circumstances as by how one engaged with those circumstances. Every interaction and every decision was an opportunity to express one’s values rather than one’s fears. And this was how one could expand into a space comfortably, and live with integrity and ease, regardless of the parameters.

After the workshop, I reflected on and named my values: authenticity and truth in relationship (with myself and with others); kindness, humor and compassion; courage in doing and speaking up for what I know to be right, grace to listen and learn. And these are my fears: criticism, lack of affirmation, being thought of as inconsequential or silly. Being a disappointment.

The wisdom I distilled from the workshop has become my compass. I still fumble at work, but I now have equipment to help me reorient. Negotiating this landscape will be a journey, but the fact that I am still in it is a sort of a victory. And, at best of times, it almost feels like a game: figuring out how to lean into my values while still maneuvering within the thicket of rules and expectations. My new perspective has helped me discover the freedom— hitherto impossible to imagine—in learning how to adapt.

And Otis? We (Chris and I. Because we’ve had to be a unified front in handling this particular challenge) gradually realized our discomfort with some of the conventions of our new suburban environment. All the material waste, for example; or the reliance on cars for even the shortest of commutes, and subsequent lack of safety for small people on bikes. And in the same vein—though I understand it’s a little less noble—we are not convinced that the best place for dogs is behind doors or straining at the ends of leashes.

When we first moved, I was anxious to fit in. I thought the only way I’d ever find peace was if we installed a fence, as so many around us had. Even though I resisted the implied views on land ownership and animal care, I couldn’t imagine any other options than “conform” or “get out.”

But I think we are finding a new way. These days Otis often goes with Chris to his job, where he can run in the fields a couple times a day. But when he’s home, he does his business and necessary investigations as he sees fit. Lately he’s spending most of his time watching the neighborhood traffic from under the bush out front. Perhaps now that he’s fully explored the neighborhood—and the two adjacent—he’s less inclined to wander.

Or perhaps it’s that his home has become welcoming and warm again. When Chris and I finally accepted that we were not going to put up a fence, or keep Otis on a lead or in a crate, we relaxed. I felt like I’d wiggled out of too-tight sweater and could breathe again. And here was the new part: this was achieved not by fleeing or by contorting to meet others’ standards, but in discovering that if I am brave, and true to my values, and behave honorably, it is possible to live joyfully, exuberantly, graciously—even in the face of disapproval.

Otis has become something of a neighborhood personality. Some give him treats and greet him—and us—enthusiastically; others frown and avoid our eyes. I understand… We are definitely not playing by established rules. But nonetheless, we are unflappably cordial, generous with all we have (nothing says “good life” to Chris more than an open-invite patio party with full coolers and loaded grills) and wholehearted participants in neighborhood rituals involving Halloween decor and Christmas cheer. And, of course, we exclaim approvingly over all the dogs. Perhaps, with time, this environment will soften, bend a bit, and we’ll find we do fit in, just as we are.

Sarah H Griffin is managing editor of The Elephant.

A selection of other pieces Sarah has written in The Elephant: Servants’ Quarters, The Shared Story, Seeing White.