I attended a public high school in my neighborhood, Washington Heights. I found himself always asking uncomfortable and challenging questions about what I was learning. These experiences and unanswered questions led to the creation of the Critical Theory and Social Justice Club, which my peers and I intended to be a space for dialogue.

Also, with the help of our advisors, Daniel Morales-Armstrong and Miranda Sanchez, we raised money and organized a trip – the first international trip a group from a New York City public school has ever taken. In April of 2016 we made it to Cuba, where for 10 days we conducted social research on what it means to be an Afro-Cuban and how race has developed in the country of Cuba. We chose to travel here in part because in Cuba, racism is illegal. 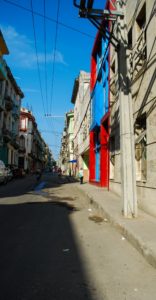 Walking down St. Lazaro Street in Havana. The red and blue building is the local community hospital. Little infrastructure in Cuba is well kept or even painted, besides key government buildings such as the hospitals. 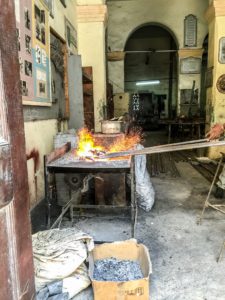 A metal worker was pounding iron beams together in hope of fulfilling his task for the day. It was 91 degrees outside when I took this image, while walking from Havana to Old Havana. The current condition of Cuba’s economy has physicians earning the same as metal workers. 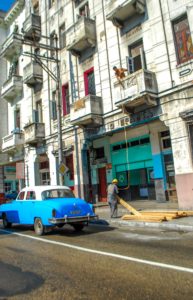 Throughout the city repairs were always underway. “Something is always needing construction in Cuba,” said a man as we walked by. We also saw that the old capitol building in Havana was under construction. Yet, as we were told by our tour guide, “It doesn’t matter if the building is ever finished, we don’t even know where our congress meets – if they do.” 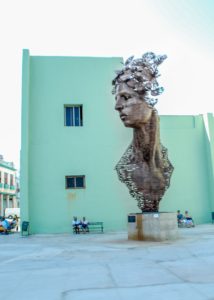 Cuba is still considered a communist nation and although we saw a lot of communist propaganda, we also saw a rich amount of local art. 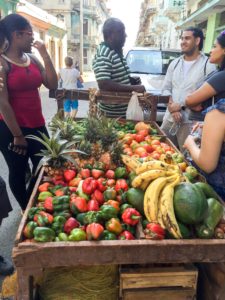 Every morning as we went out into the neighborhood and we often saw Angel pass by with his carts full of fruit. Our hostess at the hostel told us that she had been buying fruit from Angel for the past 15 years. Greed was not a common or normal feature in the people of Cuba. I first noted this in Angel, who made his income from growing fruit and selling it. Even though he had very little, he gave our group a few pineapples, which is considered expensive among most Cubans. 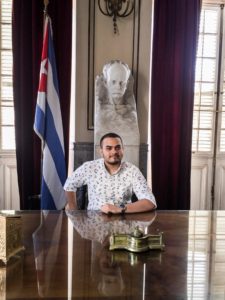 El Museo De La Revolución is inside of what was the former presidential palace. Seizing an opportunity, I sat at the desk of the former Cuban president Fulgencio Batista. It was amazing to be in a building where a country’s identity was born. 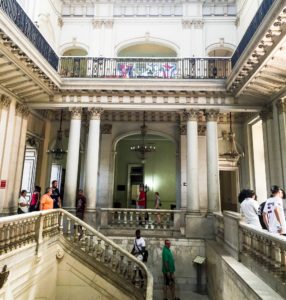 The museum tells the story of how Castro and his regime took over the capital and stormed the presidential palace. Along the side of the staircases are the original bullet holes preserved to show the battle that took place. In this palace, the former government fell before the Castro regime (though the former President Batista survived.) This was the ultimate sign to the Cuban people that their country was changed, and with that their place in the world. 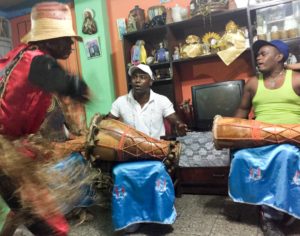 Our time in Cuba was guided by Dash Harris, founder of Afro-Latino Travel. Dash’s husband is pictured here drumming. He is wearing all white because he is becoming a santero – a member of the Afro-Caribbean religion of Santeria. To join, he has to wear white for an entire year, in order to be reborn into the religion.

I took this image as we walked down Old Havana. Afterwards I spent an hour speaking with both of the men; they are brothers. One worked in the bank down the street and the other in the nearby cigar factory. They have been meeting in the middle for a cigar and a coffee for longer than they could remember, one said.

This panorama is from the balcony of some friends’ home on the 16th floor overlooking most of Havana. In the far back you can find oil wells that move but do not actually produce any oil, as I was old by locals.